The new plug-in axaio MadeToTag version 1.9.093 for InDesign CS6 – CC 2018 contains new options for the export tag selection to map the semantic structure in a PDF document even more accurate.

In a correctly tagged PDF, special text elements, such as Caption, Blockquote and Index, must be specifically marked as such. The PDF/UA standard (PDF for Universal Access) also provides the assignment of these specific tags in order to map the semantic structure in the PDF as precisely as possible. However, only basic tags (header or simple text) are used in InDesign. Special elements, such as Caption, Blockquote and Index, did not have their own tag equivalent in InDesign.

With the new MadeToTag version 1.9.093 the following additional export tags can be assigned and transferred to the PDF during export: 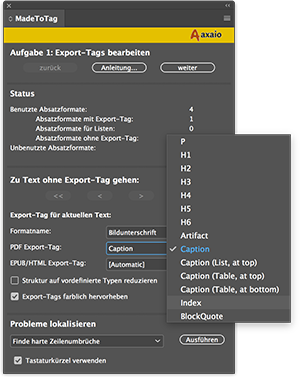 With the extension of the export tags in MadeToTag, the aspect of the accessible access to a PDF content is addressed even more strongly.

How PDF changed prepress production
dramatically in the last 25 years